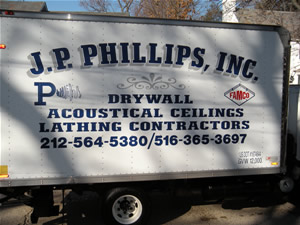 It is with great pride that J.P. Phillips, Inc. announces its 15th Anniversary. It is a landmark worth celebrating!

Fifteen years ago, John P. Markham/President purchased the company formerly known as James A. Phillips. James A. Phillips, Inc. was established in 1889, and chartered as a New Your State corporation in 1910 as a metal furring, lath, and plastering contractor.

Since 1940 we have included interior systems, metal panel and linear ceilings, acoustical wall panels, as well as black iron and metal lath work in our scope of services. The company was located at Penn Plaza in New York City. Today, the company office is based in Manhasset, Long Island.

In addition, J.P. Phillips, Inc. employs several union carpenter field personnel who diligently run work at the various jobsites installing ceilings and drywall, and our union lathers who install the supporting carrying channels for our ceilings.

In 1991, Mr. Markham took the company out of arrears and consistently worked to regain the successful status it had in 1889. As the company turned back to success, Mr Markham offered to purchase the company and J.P. Phillips, Inc. was established in June 1992.

Anthony Hefele was hired in 1987 and followed Mr. Markham to his ownership. Ron Ford (Office Manager and now Estimator) was hired in 1991 and also rolled over his employment to the new established company. J.P. Phillips, Inc. steadily grew over the next few years, and Mr. Markham needed to hire additional help for the office. In November, 1996 the first woman was hired: MaryEllen McCloskey as Secretary (succeeded to become his Executive Assistant in 2004). We were all saddened in 1997, when our former driver Chester Zubowski died of cancer.

In July 1997 J.P. Phillips, Inc. hired Everald Cummings as its new driver. The company continued to grow in leaps and bounds. In the summer of 2000, Joseph McCoy was hired as Superintendent / Project Manager to help run the field personnel at various jobsites. As the company continued to grow, Mr. Markham had the need to hire an additional office person. In March of 2003, Richard Markham was hired to generate the payroll.

To all our G. C.'s customers, employees, it is with absolute sincerity that I say "THANK YOU!" for 15+ years of success.